During his military career in a French special force unit (“Commandement des Opérations Spéciales”) in the South West of France, he discovered the KM system of self-defense. In 2001, he started a new career as a Customs Agent and settled in the Savoie region where he began training regularly with Philippe Kaddouch, his future chief instructor.

After hours of intensive training, he obtained the different practitioner degrees under the supervision of chief instructor Philippe Kaddouch and head instructor of the IKMF, Eyal Yanilov.

He continued his intensive training and gradually the idea emerged to become an instructor. In 2006, he successfully passed the course of instructor and was qualified as an instructor according to the standards set by the IKMS. After getting his instructor qualification, he was able to carry out his project, to teach and promote Krav Maga techniques and open his own club. 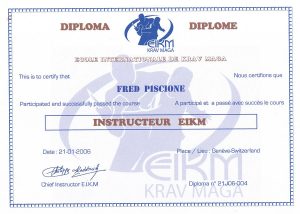 Today, he continues his intensive training in order to keep his skills sharp and he regularly participates in seminars to ensure that he delivers the best KM training and that the techniques being taught are relevant to today’s potential hazards. He can count on Philippe Simon (Head of an International Federation) for advice and technical support.

After teaching Krav Maga in Ville la Grand and Douvaine, he teaches in Massongy now. With KM74, Krav Maga training is based upon the techniques and conceptions of the method developed by its founder Imi Litchenfeld.